HiSky opens a new operational base, the third in number, from Targu Mures International Airport. The company will start operating flights in December, this year, on three scheduled flights: Paris, London and Milan.

"The opening of a new operational base, in our first eight months of operation, reconfirms our ambitions and determination to become an accessible company for Romanians in as many counties as possible. We thank the partners from Targu Mures for the receptivity and warmth with which they received us, and we guarantee the passengers beautiful experiences in terms of air travel ", said Iulian Scorpan, the HiSky general manager.

Flights to London Stansted Airport will be operated every Wednesday and Saturday from 18 December 2021. Prices start at 39.99 euros.

The Targu Mureș - Paris flight will be operated at Beauvais Airport, on Thursdays and Sundays from December 19, 2021. Prices start at 39.99 euros.

Flights to Milan will start on December 20, 2021. This route will be operated every Monday and Friday at Bermago Airport. Prices start at 30.83 euros.

Tickets are already available on www.hisky.aero and at partner agencies.

"Every new airline, every new flight, represents an opportunity for the region because the world's big cities are becoming easily accessible. As soon as the new races start, we will be able to get to Paris, London and Milan easier and faster, but the number of destinations will increase even more next year. This is another important step for Transilvania Targu Mures Airport to become a transport hub of the region, through which we will be able to reach popular tourist destinations, but also to reach the center of international air traffic flow", says President of Mures County Council, Mr. Peter Ferenc.

"Is is said that hard work brings rewards and this is confirmed by the fact that Transylvania Targu Mures Airport, the air gate of Transylvania, is in a wide process of development, which was observed by one of our reliable partners: the HiSky Europe air operator. We are consolidating this status by opening an operational base with an Airbus A 320 aircraft belonging to HiSky Europe. Given the large number of requests and December being the month of gifts, our surprise for passengers is the launch of flights to Paris, Milan and London. We feel accomplished by satisfying the passengers who choose to step on our doorstep", added Andrei Peti, the Chairman of the Board of Directors of the Transilvania Targu Mureș Airport Autonomous Administration.

The flights will be operated with an Airbus A320 aircraft.

We remind that HiSky is a certified airline in Romania and the Republic of Moldova. It operates scheduled and charter flights from 7 international airports (Cluj, Iasi, Satu Mare, Baia Mare, Targu Mures, Oradea and Chisinau) to 15 major destinations in Europe, Asia and Africa. HiSky has a fleet of two Airbus A320 (YR-BEE, YR-SKY) with 180 seats and an Airbus A319 (ER-SKY) with 144 seats. The average age of the three HiSky aircraft is 11 years. The services or any other information about HiSky can be consulted on the website www.hisky.aero. 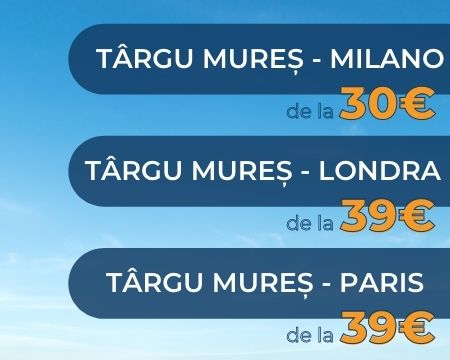