HiSky operated on April 28, 2021, the first flight on the Cluj-Napoca - Lisbon route. The connection with the Portugal’s main airport is a premiere for Cluj-Napoca Airport, thus establishing new commercial and tourist connections between these regions.

The Lisbon Portela Airport is the largest and busiest airport in Portugal. By flying to Lisbon, tourists can enjoy the advantage of having the shortest journey to the Portuguese capital and, adding that the airport is located only 6.5 kilometers from the city center, it is clear that the plane is the most efficient means of transport to this destination.

Flights to Lisbon will be operated by Airbus A-320 aircraft, 2 times a week, on Wednesdays and Sundays, as follows:

The HiSky company has also scheduled flights to Dublin (starting date - April 29, 2021, 2 times / week, on Mondays and Thursdays), as well as to 6 other tourist charter destinations, such as Antalya (Turkey), Djerba and Monastir (Tunisia), Hurghada and Sharm el Sheikh (Egypt) and the absolute novelty of this season, Agadir (Morocco).

Mr. Viorel Federiga, Board of Directors’ chairman, together with Mr. David Ciceo, General Manager of the Cluj Napoca International Airport "Avram Iancu", mentioned on this occasion: “The launch of HiSky’s flight operations, as well as the news that this operator brings to the network of routes available at the Cluj Napoca International Airport "Avram Iancu", meet the passengers’ connectivity needs in all traffic segments, respectively business, ethnic or tourist traffic. The HiSky’s decision to open new routes and to develop the operational base in Cluj, represents a new confirmation of the positive premises in terms of regaining passenger traffic.” 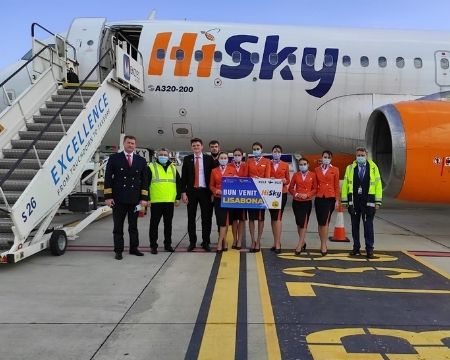